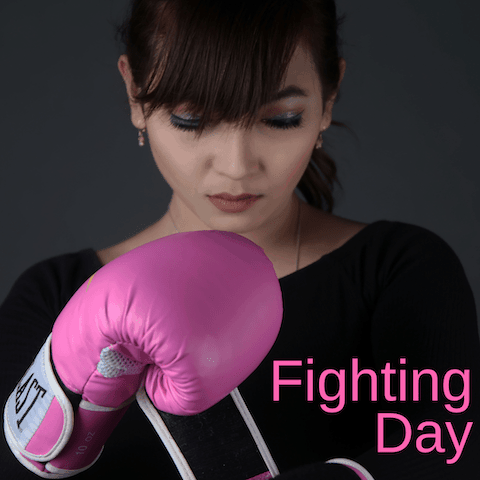 So many people with chronic illness call themselves fighters or warriors. I tend to steer clear of this, because I want to think of myself in different terms. But, days like today remind me that if I don’t fight, I don’t know what will happen.

I knew today would be hard, because I was determined to make it to church. The pain was bad, but not severe as it has been. After sitting through church and making a pizza afterwards, my pain was getting worse. And, then the fatigue (exhaustion) set in. I just wanted to sleep forever!
As I rested on the couch watching football, the obvious fight was on. The teams were fighting for everything, because the play-offs meant someone’s season would end if they lost. I could really relate to their sense of urgency. Today was a fighting day.
I’m fighting. There is a necessary fight going on to endure this awful and overwhelming pain. It doesn’t matter if the pain’s intensity is created by going to church or any other activity. When the pain gets bad, fighting is necessary.
When the pain is so horrible, fighting becomes a physical and mental battle. I fight physically by trying some non-prescription relief. Today, I used the cherry-pit microwavable wrap on my lower back. The mental fight was hard. That’s when I’m fighting my urge to just go to sleep. The mental fight makes me want to cry and feel sorry for myself.
Taking my dose of Naproxen was my fight to cope with the pain. This dose dulls the pain enough to stand it. Although I can tolerate a lot of pain, when it’s horrible, the fight has to include some medicine. I would really rather watch a fight than engage in it myself. But, if the football teams can do it, so can I.
Do you consider yourself a fighter or a warrior? What are your worse fighting days? How do you fight the pain? …Hoping you don’t have to fight today. God bless.
@2019, copyright Lisa Ehrman