Skip to content
I’ve always known how great it is to exercise. A child of the 60s-70s, playing outdoors and moving wasn’t considered “exercise”. We just had fun, but it did result in us getting hours of exercise every day. Whether we were running, climbing, or biking, moving was fun! 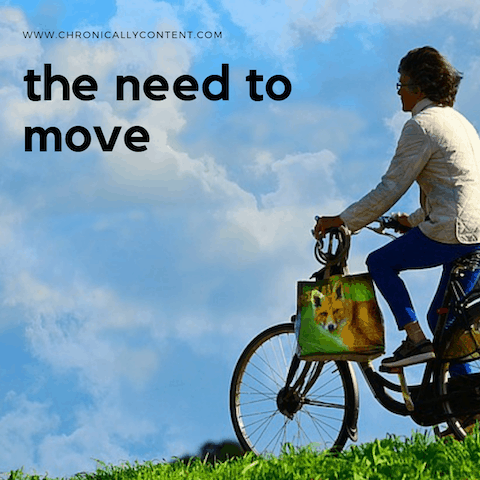 During my adult years (20s-40s), my exercise routine usually consisted of indoor aerobics. With three children, it was easier to work out with a tv show or video-taped routine. I sometimes added light weights and even joined a gym one year. I was aware of all the physical and mental benefits of exercise. Working out helped me to keep my weight under control and helped with my energy level.
After a big move, I knew my energy levels were awful. I joined a gym and began a gradually-increasing exercise routine. I tried all the different machines: bike, elliptical, and treadmill. After months of trying, I felt worse and learned that I was exercise intolerant. I felt worse, instead of better and was making no progress.
This was the time that I knew something was wrong, and sought medical attention. My physician started first with exploring my mental health, wondering if I was depressed. Anti-depressants did nothing to improve my fatigue and increasing pain. He had also taken tons of blood to test me for everything from lyme disease to autoimmune diseases.
Thankfully, this doctor didn’t give up (like many did). He didn’t tell me that this was “all in my head”. When my bloodwork showed numerous abnormalities, he told me that he was convinced that I had some type of connective tissue disorder. (In the end, he was right. Although, it took years to come to this conclusion). This began years of moving, and with that, new doctors. And, eventually, answers were found..
Now, all doctors know, and have told me that I should exercise. With many trips to physical therapy, I was usually pushed well beyond my ability. This always caused failure to improve, because these doctors just didn’t understand the limitations of Ehlers Danlos Syndrome.
My recent trip to the geneticist was helpful. She mentioned that swimming and stationary bikes were the best exercise ideas for me. Swimming indoors with chlorine had been a failure for me, because of the migraines. Since I had recently been given a little money, I decided to purchase a bike to have at home.
After my Christmas trip, I was able to begin using the bike. I was thrilled to sit down for the first time. I knew that I would have to start out very slowly. I adjusted the position to fit my leg length and began to pedal. Whoa! The intensity level was set to a high number. I tried many levels, and had to finally set it to level 1. And, even level 1 was tough.
I thought my legs wouldn’t be able to make it around. It was so hard! The first day I pedaled long enough to burn 10.6 calories. Wow! That was a huge accomplishment for me, although it wouldn’t be for most people. The second day I reached the 12 calorie mark, and that thrilled me. Today I’ll try to burn more calories. My goal is to increase the level and time and eventually reach an aerobic benefit. But, for now, I’m moving!
@2019, copyright Lisa Ehrman
Disclaimer: I’m not a medical expert and don’t offer medical advice. The above is my personal experience. If you have medical needs, please consult your personal physician.